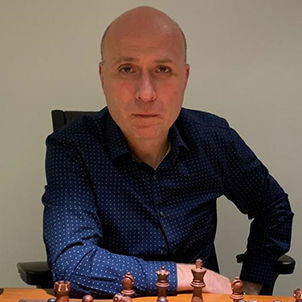 Grandmaster Vladimir Chuchelov is a Belgian chess grandmaster and professional trainer. From 2009 he worked for four years as the head coach of the Royal Dutch Federation. In 2010 he was awarded the title of FIDE Senior Trainer. In 2013 received the Botvinnik Medal as best man's trainer 2013. He has coached numerous international stars, just to name a few:

It brings a whole new perspective. Chess game , as you have never seen it before!

"Strategic balance" course was developed in the period of over 10 years. Highly selected and instructive material, introducing quite a different approach to position evaluation, decision making and the game itself. To learn to play according to requirements of position, develop real positional understanding are the main objectives. New definition of “prophylaxis”, getting sense of “dynamics”, and very intensive “calculation training” among the strong points of the course. "Strategic balance" is a tool that helps you to figure out right approach to position, find best suitable moves. It simply helps you better understand chess. It became GM Chuchelov’s "trademark" and a "common language" with his students.

Recording of the sessions will be provided.